Part One covered day one, finishing with that time that my exhausted body fell asleep before my head had even touched the pillow. We had plans to get up early, eat our beautiful European-style breakfast, checkout of the hotel, and head to The Vatican. Thank Goodness for luggage storage, and Italian Uber because it was quite a journey to our new hotel that afternoon.

Our walk to The Vatican was super easy – we climbed some stairs, we crossed a bridge, and yep it was right there in front of us and that, I swear, was kind of a bizarre moment. So many selfies were taken on this bridge and I just remember my brain screaming at me “just go to the damn thing!” but the surroundings were so pretty I couldn’t decide what to look at first.

I think one of the easiest ways to try and describe my feelings that morning is summed up pretty perfectly by U2, in “I still haven’t found what I’m looking for”. I knew then that I could do all of these things in Europe, I could go anywhere and do anything. Or, I could sit by myself and just watch the scenes around me, and regardless of what I chose to do; I knew I would still never be satisfied. I honestly feel like I could go back to the same places a million times and find something new in every single one of them. It’s a really inexplicable feeling to be so sure of what you know, and then to stand in a foreign place and realise that on a larger scale, you know absolutely nothing. I don’t know whether it was the fact that my brain was finally awake, that I’d had a feed and a decent sleep, or that I was just in a mood to be really philosophical and overly complex, but walking to The Vatican felt just like that. 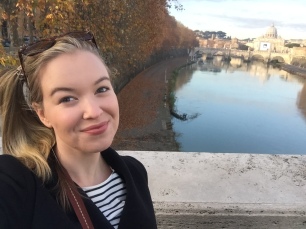 We walked around the main area for a little while because it was strangely deserted, except for some beautiful little nuns in their habits carrying their Rosary. We hovered at the Christmas tree and life-sized Nativity scene for quite a while, because Christmas time is my favourite part of the year, and Ellen was fantastic at taking the really arty-style photographs.

We bought tickets to a “skip-the-line” self-guided tour and we were both in awe of this place. Saint Peter’s Basilica is indescribable, never have I experienced anything so intricate and grand. I don’t even think the written word will ever do it justice, and I’m certainly not going to be the poor sucker who tries. We spent about 2 hours there I believe, and then finally decided we were feeling hungry enough to go find yet more food.

Traditional carbonara called me. I’m so glad I answered. We settled for a cute little restaurant with a large number of heaters and a small number of customers, not too far from our Navona hotel. We sat for a little while talking and looking at photos we had taken. Ellen and I quickly got very good at trying each other’s food without waiting for the other to offer. I think I started that little habit when my fingers were practically a millimetre from her pasta before I asked the question “may I?” and she just laughed at me. Two things I think we both appreciated about travelling with each other:

2: “I’ll pay for this” was always eventually followed up by “you got the last one, it’s my turn to pay”.

We were both really eager to move onto our next hotel and meet up with our tour-group that evening, but surprised when we arrived to two separate rooms with roommates who weren’t each other. Nothing like being thrown in the deep end! That’s how I met Natalie. We clicked instantly and our schedules matched really well. She was an early riser, and I liked to roll out of bed, shower and go. Perfect! The three of us headed to the group orientation together and met the other newbies who were joining a tour already well in progress. These characters included my favourite people ever, the South Africans, “Norminda” and “Sooze”, and some lovely people that were travelling individually as well.

This new group embarked on a walking tour shortly after our meeting and we caught the metro straight to a station near the Colosseum. It was getting dark as we walked around here and the temperature dropped a little, but the walk was unbelievable and eventually you didn’t even feel the cold because there was so much else to think about above that. The rest of the walking tour included the Spanish Steps, The Trevi Fountain, The Pantheon, and of course Pizza and Gelato, and a trip back to Piazza Navona. 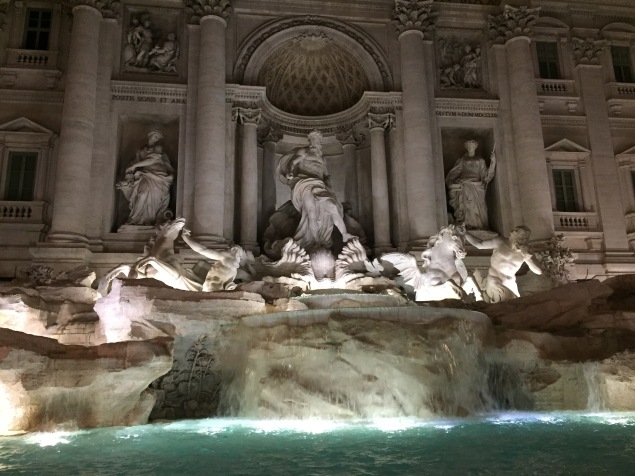 We threw coins into the Trevi Fountain and got wet bums from attempting to sit on the edge for a cute photo. A real highlight for me was sitting outside the Pantheon, listening to an Italian busker. When standing in the centre of the Pantheon, I found myself imagining what it would feel like to be in this place during heavy rain. At 43 metres high, with a hole in the roof I think that would have been amazing to see.

When we finally started the journey back into the hotel I was feeling really excited for it to already be morning, knowing full well that we would be heading to Venice, via Verona that day. I felt tired, but was quite restless that night. Looking back at it all I know now that excitement is the best possible thief of sleep.

One thought on “The Italian Series: P2 – The Vatican and a New Family”

What do we chat about?